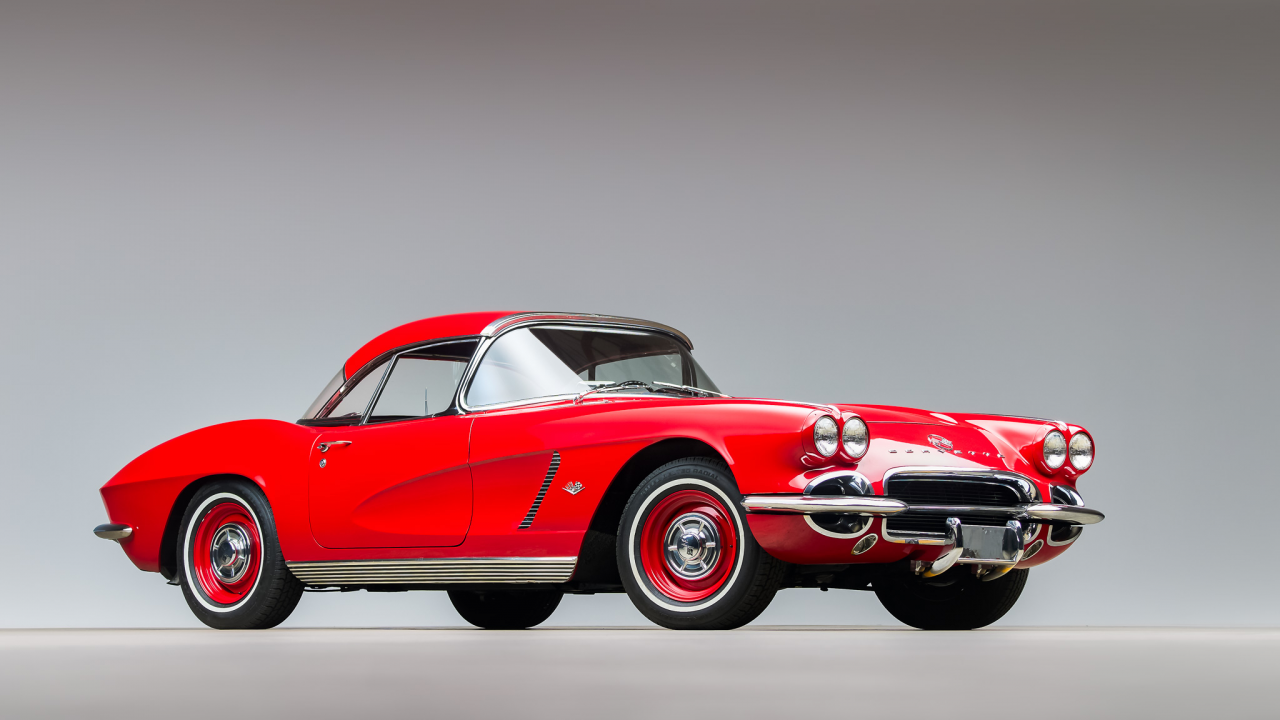 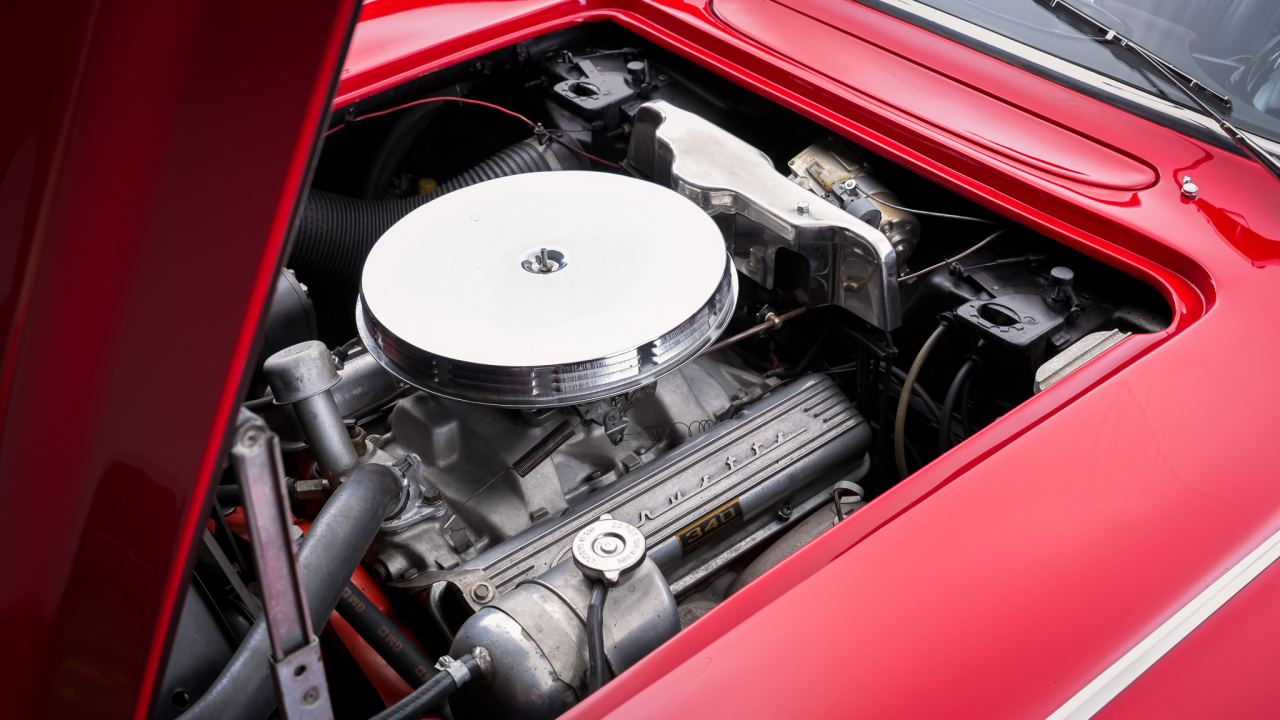 We're at it again. Another spectacular vintage Corvette has graced the grounds of JBA Speed Shop and we are as knocked out by this one as we were for the last two, which were a big-block '66 coupe and a small-block '67 roadster:

For this overview, we're going back in time to the glorious solid-axle cars that started the Corvette legend in 1953. Running through 1962, which is what the epically beautiful Roman Red example is you're looking at here, we are again going to detail the engines that were equipped in these classic '53-'62s.

Starting in 1953 and 1954, the options were simple--there weren't any. "Polo White and Powerglide only" was the deal for the first 300 '53s and that extended to the 235-cube Blue Flame straight six. Same for the '54s, as the first 265 cubic-inch small-block V-8s didn't appear until 1955. Also for the first time in 1955, a manual transmission was available in the form of a three-speed--though most '55s were still Powerglide equipped.

For 1956, three versions of the 265 were offered starting with the base engine and the optional RPO 469 with dual quads (2x4s) and 225 horsepower. RPO 449 (reportedly a rare option) added a "high-lift" cam to the dual-quad 265 and resulted in 240 horsepower. Powerglide automatics and three-speed manuals were about a 50-50 split for the model year.

For 1957, there were a total of five 283s including the base engine. A pair of dual-quad options start with RPO 469A, which was rated at 245 horsepower. A higher-compression dual-quad 283 carried RPO 469C and was rated at 270 horsepower.

After the 2x4 283s, Rochester mechanical fuel-injection made its Corvette debut on a pair of "fuelie" versions and were rated at 250 horsepower, followed by the vaunted 283 with one-hp-per-cubic-inch and 283 horsepower. The RPO numbers for those were 579C (250hp) and 579B (283hp), respectively. RPO 579E was also the 283/283 but equipped the car with a rare air-box induction setup and only 43 "air-box fuelies" were built.

With pairs each of dual-quad and fuelie 283s, there is sometimes a bit of confusion, because the hi-po dual-quad engine had a higher power rating than the lower-level fuelie 283. The overlap (245hp 2x4, 250hp fuelie, 270hp 2x4, 283hp fuelie) can occasionally throw some off, so we hope this clarifies things a bit.

Moving on to the '58s, the picture is similar, but it does simplify to an extent. In fact, for the '58-'60 cars, the engines and RPO numbers were all the same, including how the lower-performance 283 fuelie made less power than the higher-performance dual-quad 283. Also, note the highest-performing 283 fuelie got a rating bump from 283 to 290 horsepower.

In general, most power upgrades were due to higher-lift-and-duration cams. And the high-peformance dual-quad and fuelie 283s had solid-lifter cams--the others were hydraulic. Another note to mention, is that starting in 1960, the fuelie 283s were no longer available with a Powerglide automatic. To simplify, we'll show the optional engines (all 283s, except for the '62 327s) in a series of charts:

For 1961, there were some changes in the RPO numbers as well as another rating increase for the highest-performing fuelie 283, making it the strongest Corvette 283 of all with 315 horsepower:

In the '62s, like the car in the photo gallery, the 327 made its debut and is to many the best-ever small-block Chevy and versions of the 327 were produced for Corvettes through 1968. The option picture was also considerably simplified with a 250-horsepower 327 being the base engine. The dual-quads were also dropped and there was only one fuelie engine being the high-end version with 360 horsepower, also not available with a Powerglide automatic. The 1962 option sheet looked like this:

Circling back to our gallery car, we'll opine that for several reasons, this car as-optioned is an example of the best-ever solid-axle Corvette. First of all, the '62s had the simplest and cleanest styling without a color contrast in the side coves.

The '62s also were the only solid-axle Vettes with the venerable 327. And further, of the four engine choices, we consider the 340-horsepower 327 (one step below the 360-horse fuelie) to be the best choice of all, given that the Rochester mechanical FI units can sometimes be on the finicky side.

While fuelies are certainly bad ass in their own right, the high-horsepower, carbureted solid-lifter small-blocks are no dogs and a well-driven one would likely go toe-to-toe with most of the fuelies.

In for a new set of whitewall tires from our tire shop to complement its super-cool dog-dish hubcaps, as well as a general inspection, this car and its flawless Roman Red finish wowed all of us every time we stepped outside of the shop to take in some fresh air.

And as for all Corvette small-blocks, they were a great run--especially the 283s and 327s in the solid-axle and Mid Year '63-'67 cars--and we work on all of them here at JBA Speed Shop. --Miles Cook