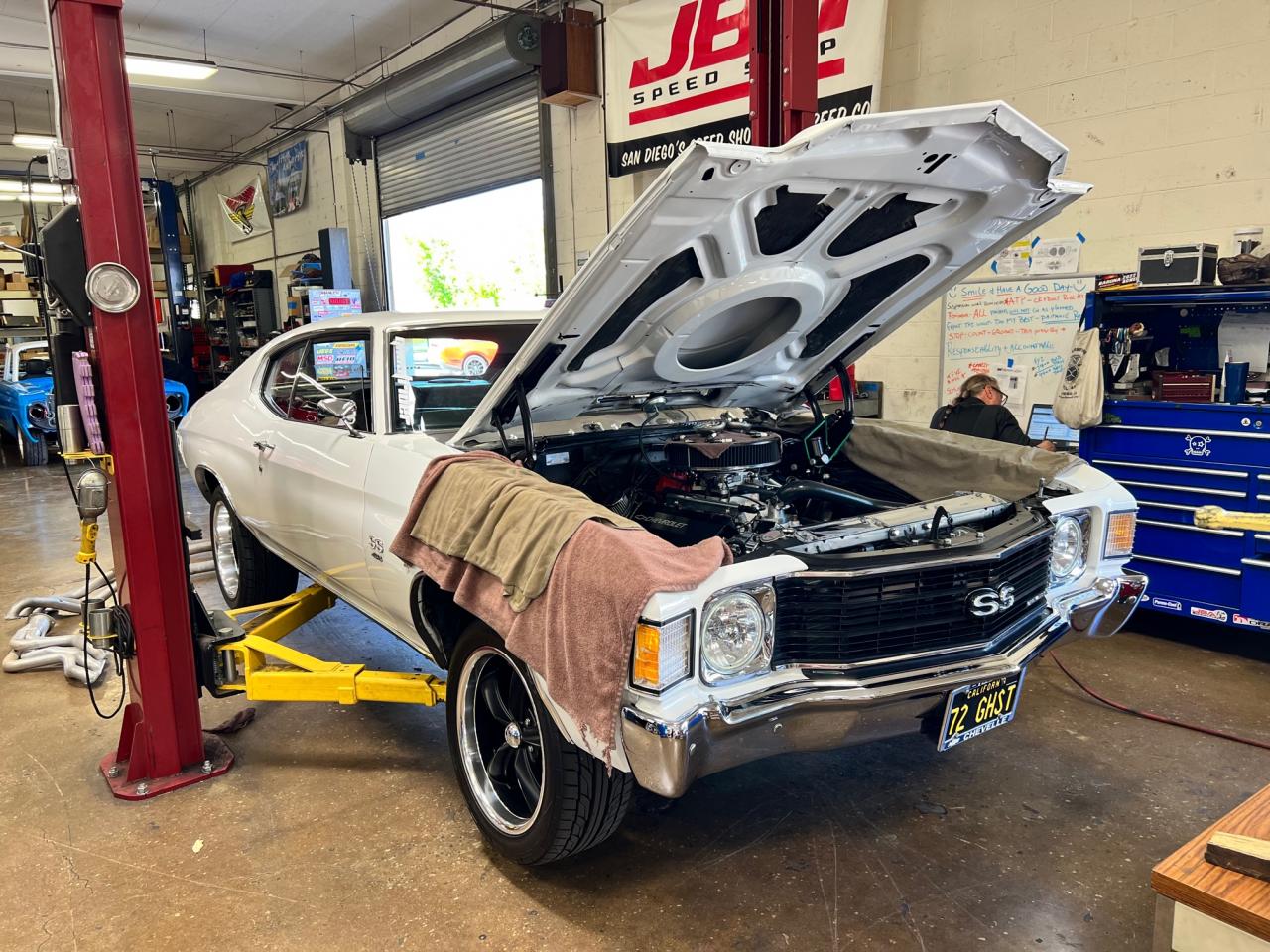 We've covered several projects on Ford cars here at the shop in the last month or so. So we took a walk for a few minutes to look for some GM iron, since we try not to be biased around these parts. With camera in hand, this pair of very nice Chevrolets were on the shop floor in the form of a black '69 Camaro and a white '72 Chevelle.

First up, the small-block-equipped Camaro is in for a big list of things to fix, including overhauling the brake lines by replacing the hard brake lines with stainless-steel tubing. Other hoses were also checked and replaced as needed. We also installed a line lock, serviced the power steering pump and added new power-steering fluid.

The car also had some fluid leaks underneath, so we fixed those as well. This included removing the engine and installing an oil pan gasket, a pair of valve cover gaskets, a new one-piece main seal in the back of the engine and several other engine-related items. A new McLeod clutch was also installed in front of the car's Tremec TKO 600 five-speed manual transmission.

Suspension upgrades were also on the list for the '69, including a set of front and rear anti-sway bars and a front-end alignment after installation of those pieces.

Moving to the interior, we went into the driver-side door window to fix the side-window glass. It was falling off the track/regulator assembly and down into the door. This entailed installing new guides, rails and the rollers that locate in the rails.

With the motor all sealed up and back in the car, we also installed a new carburetor and a full MSD ignition system, which includes an MSD distributor, Blaster coil and a digital 6AL box. The next plan from there is to get it all tuned up and running in tip-top shape, then possibly putting the car on our Mustang chassis dyno. We will update that here with power-output numbers, if the car ends up going on the dyno.

As for the sweet big-block Chevelle, you can see from the accompanying photo gallery, it's getting a header upgrade from a 1 5/8-inch primary set to a pair of 1 3/4-inch coated full-lengths from Dougs Headers. A pair of new motor mounts were also installed to raise the engine about 3/4-inch to allow the new headers to fit.

We also did some tuning work on the car's Edelbrock EFI system in order to get it running the way a big-block Chevy should in a GM A-body car.

We'd be remiss if we didn't mention the shop techs that make all these procedures happen. They are the core of this place to be sure. Brent Baughman and Ray Klimas are the two guys that clearly deserve their names in lights here, with Brent and Ray doing the good stuff on the Camaro and the Chevelle, respectively.

In the meantime, JBA Speed Shop is here to do repair, maintenance and upgrade work on just about any vintage or late-model GM or Ford car and some light trucks, and we welcome your inquiry.--Miles Cook